HEAD released their 2011/2012 range of squash rackets earlier this year updating three current rackets with their technology “Innegra” and also adding a new racket into the mix. The Cyano, Neon and Argon have all been given the update and also come with different styling. The new racket is the cyrus which along with the others offers a good choice of racket for each type of player.

STATE-OF- THE-ART RACKETS FOR ANY KIND OF PLAYER!

The HEAD YouTek Innegra series of rackets has been designed to work alongside the existing ” d3o” and “teflon” helping to advance the feel of the rackets. It will enhance the player’s performance whether you are playing smooth and consistent or if you are playing powerful and aggressive as the racket can adapt using its unique characteristics. The new Innegra high performance fibre will keep the racket in the best condition so it will not lose any of its properties and eliminate vibration considerably.

HEAD has used the new d30 technology in the racket’s lay up and is positioned in the frame’s shaft. This new d30 is being classed as a ‘smart material’ mainly for its futuristic and abnormal behaviour under stress. It is a ‘dilatant foam’ which can suddenly change under load or impact and offers new opportunities for the player.

The d30 technology can sense the on impact of the ball whether it is a hard aggressive stroke in which case the racket stiffens to allow explosive power or whether a soft accurate stroke is being played resulting in the frame absorbing the impact. This is achieved by the d30 smart molecules suddenly locking together which dramatically stiffens the racket in nanoseconds.

This should result in the player getting to use maximum power for attacking and accurate slice and touch for short play at any time. 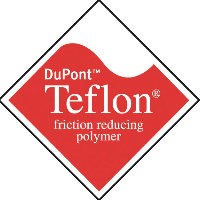 HEAD have also added Teflon grommit strips to this new range to reduce friction. On other rackets friction can occur between the strings and the grommit strip which gives some resistance and in turn reduces the power and energy of your shot. The Teflon grommit has low friction contact surface which lets the strings slide through with hardly any friction at all allowing full power in your shots. The grommit also maintains excellent tension in the strings due to the low friction which also creates a larger sweet spot.

The YouTek series still combine the revolutionary corrugated technology from the last range with its excellent benefits. It is incorporated into the shaft giving a 12% increase in stiffness optimizing torsion, power, bending and comfort on every shot. 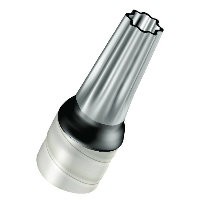 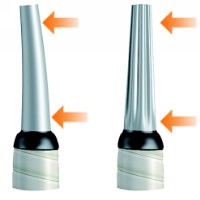 Introducing the Innegra, the lightest high performance fibre in the world today. This revolutionary fibre although being very light is extremely tough and when married up with HEAD’S advanced carbon composite creates an ultra tough hybrid composite. The new hybrid – composite is put in place for advanced shock absorption and stability, the results show that the vibrations created on the actual ball impact can be reduced by up to 17% which is a vast improvement for the players precision and control. The main benefit is your racket will stay in the perfect position for longer so you do not lose any of the other major properties. Stability is also increased due to the ultra tough hybrid – composite making the racket more durable but not adding extra weight.

The new look for the cyano 2 is yellow and black with the teardrop designed head. Built to deliver power on every stroke with its head heavy balance.

The Neon 2 130 is finished in red and black an is also head heavy. Designed for control but is also very powerful for a quadroshaped racket. 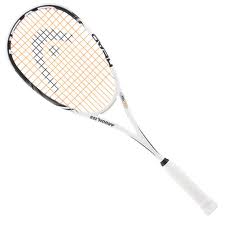 The Argon 2 155  is head light and designed for control and precision, it’s also the choice of professional player Daryl Selby.

I am now becoming quite a fan of these rackets which seem to be well designed and feel very solid. The Cyano 115 is slightly lighter than a racket I would normally use and is very easy to move round the court, but because it is head heavy the weight is well-balanced. Although it is light I still wasn’t tempted to start flicking shots which is usually what I am tempted to do with light rackets, but because the head is that bit heavier I found I could still play my normal squash game. Once again the teardrop head shape with the open  throat creates excellent power when attacking and still has a good mount of control for touch shots. I would definitely recommend this racket to an aggressive hard hitter who likes to power his or her opponent off the court. For the touch players the Argon 2 155 would be more suited with its head light design which creates more feel to your shots. I found this racket great for drop shots, controlled volleys and lobs as it gave me more accuracy. It is nowhere near as powerful as the cyano but once again it comes down to what size the player is and how strong etc, but it had enough power to attack the ball nicely and still control with slice. The Neon 2 130 is the middle of the road racket which still has the heavy head for power but the quadroshaped head for more touch and feel. This was my favourite racket as it suited my game the best, enough power and enough control and also roughly around the weight I would prefer. I was getting nice length up and down the walls, not over hitting or struggling to find the back wall and it was also good for my volley game.

After reviewing HEAD rackets for a third time I am impressed at the way they have improved over the years, maybe ten years ago I would have not even contemplated using one. The rackets  were more like slingshots, full of vibration and only really built for maximum power. Now the HEAD rackets are competing with the top brands and seem to improve every season which attract more top players to use their equipment, I would certainly own a HEAD racket as they have a certain feel and balance that I personally enjoy, also they are slightly cheaper than some of the other top name brands which also a bonus.