As from april 2009 Tecnifibre are launching there new ranges of squash rackets for the 2009/10 season. They are certainly making an impression on the world squash circuit as many of the top players have been using the new models with great success. The new range of rackets looks fresh and exciting combining new compositions for the frame with the well known top quality premium string. There are three main categories for the rackets and I have chosen one from each which are all endorsed by top flight players to overview along with the specifications. 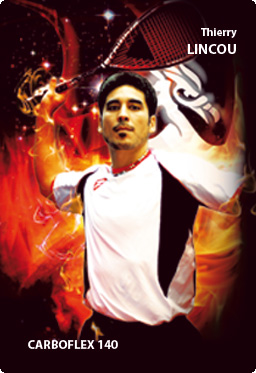 The first category is the ‘carboflex’ series which consists of the 130,140,speed and junior. The 140 however is the choice of  Thierry Lincou a well established top player on the world squash circuit who says “Carboflex gives me power and feel to my game and as taken me to the world open and world number one”. The carboflex boasts to incorporate the isomorph shaft technology with basaltex transmitters (a mineral fibre extracted from lava stone) to give the player power when needed but also excellent touch. Extra response is gained by the shaft’s flex benefits so it is appropriately suited to the player of  today.

I have had the opportunity to put this racket to the test and I must say I was quite surprised at how good it felt. It did lack some power but I was impressed with the control and touch. The carboflex obviously does cushion some of the pace on the ball but without any vibration unlike some rackets I have tried. The control is also down to the better quality string which is put in as standard and lasts a lot longer than ordinary cheaper string.

Overall the carboflex 140 is a nice example of a good balanced racket for the alround player. I enjoyed playing with it as it is effortless to swing and feels great when you hit the ball crisply. If you seek lots of power then this racket is not right for you and should look more at the other rackets in the series I have also reviewed.

I feel tecnifibre have come along way with their racket designs and I also feel their new range will be a great success as more players chose tecnifibre over other well known brands. Not only are they competing with all the other top brands with there cutting edge technology but the carboflex line are also reasonably priced which makes them attractive to beginners as well as professionals. Prices vary from shop to shop but expect to pay in the region of £65 to £85 which is a good deal and will fit into many peoples budget, but also look for bogof deals which will prove even cheaper.

Here is a link to the best deal I could find, just click on the image below.